One of the biggest mysteries in neutrino research is whether neutrinos and their antimatter twins, antineutrinos, behave the same way. This turns out to be a very important question—if the answer is no, it could explain how our universe full of matter came to exist.

Scientists think that matter and antimatter should have been created in equal proportions at the birth of the universe, yet when the two interact, they annihilate into pure energy. This should have left an empty universe. However, you’ve probably noticed all of the stuff made of matter around you. This kind of asymmetry is fascinating. It makes us want to know: How did this imbalance arise? 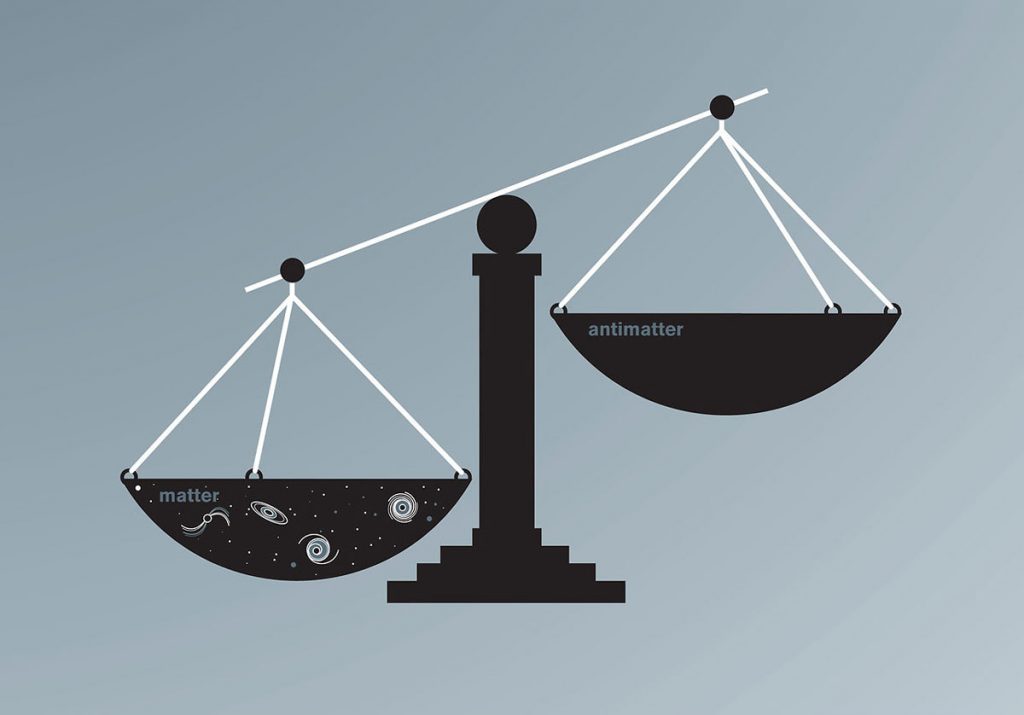 Neutrino scientists are looking for something called “charge-parity violation,” often shortened to CP violation. This complicated-sounding term really just asks if neutrinos and antineutrinos can pull off “the old switcheroo.” That is, does the universe treat the matter and antimatter particles identically? Scientists know neutrinos change flavors as they travel, a phenomenon known as oscillation. If the oscillations of neutrinos are fundamentally different from the oscillations of antineutrinos, then CP is broken.

Scientists already know that CP is violated for one major building block of the universe: the quarks. However, the discrepancy is not enough to account for the matter-rich world around us. But if CP were also violated among neutrinos, it could point us towards the answer.

Neutrinos could play a key role in why our universe is made of matter.

Physics is driven by symmetries. One key symmetry dictates that matter and antimatter are handled the same. In physics everything is invariant under charge, parity, and time; this is called the CPT theorem. This means if you were to change all of these things together, the universe would still react exactly the same. Therefore, for every process that produces a particle, there is a mirror process that produces an antiparticle. So during the Big Bang, we would have expected that the universe was formed with equal amounts of particles and antiparticles that would then annihilate with each other into pure energy.

Yet we know that the universe is full of matter and that everything in it, every star, planet, and galaxy, is made of matter and not antimatter. This abundance of matter means that after the particles and antiparticles annihilate with each other, somehow there was extra matter leftover, which now makes up the universe that we live in.

How this happened is a big mystery. In fact, this is one of the biggest mysteries that physicists are trying to solve. This question is fundamental to our understanding of how we came to exist. 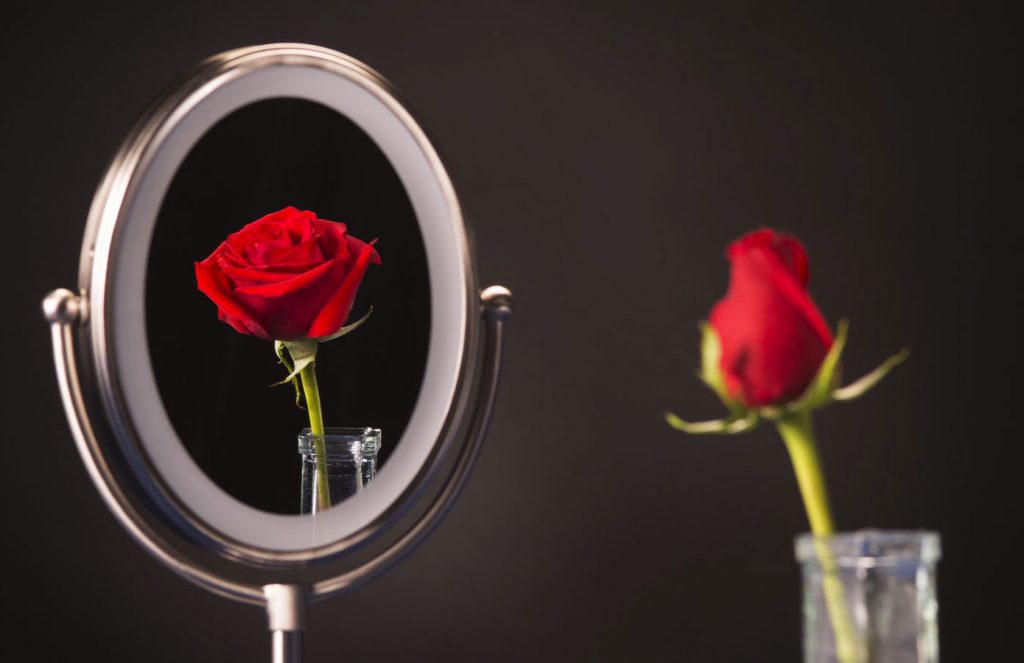 Researchers have proposed a process that treats matter and antimatter slightly differently, a process that does not conserve the charge and parity parts of CPT. If this were the case, it would mean that a tiny bit more matter than antimatter was produced in the Big Bang.

In 1967 Andrei Sakharov, A Russian physicist, came up with three conditions that must be met in order for matter and antimatter to be produced at different rates. These are:

Physicists have searched for particles that do not conserve baryon number and, while they have found examples, they have not found this on a scale that can solve this problem. But there is another way to achieve this: if the number of leptons (the class of particles that include neutrinos as well as the charged electron, muon, and tau) produced in an interaction aren’t conserved, this can lead to a difference in the number of baryons. 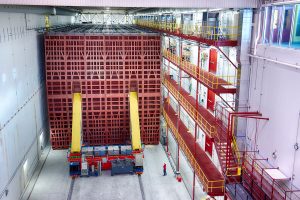 Physics have been searching for this process that treats leptons and antileptons differently to help explain matter’s dominance in our universe. This process is called leptogenesis. And neutrinos, one kind of lepton, are a prime candidate.

Some neutrino models contain heavy right-handed neutrinos, never before seen by scientists, that could have existed early in the universe’s history. These could have decayed in a way that did not conserve lepton number.

A variety of experiments, including NOvA, T2K, and DUNE, will search for the answer to a big part of this puzzle. They’ll look to see if neutrinos and antineutrinos conserve charge and parity. If it’s found that neutrinos don’t conserve CP, it could help us understand how the universe evolved to what we see today.

Physicists are particularly interested in symmetries of nature and whether those symmetries ever break. When scientists say “neutrinos might violate CP,” this is really just shorthand for asking if a particular kind of symmetry, charge-parity symmetry, is broken. Do neutrinos and antineutrinos behave differently, and does nature have a preference for one over the other? From the point of view of neutrino oscillations, this means that neutrinos and antineutrinos might oscillate at different rates—something many experiments have seen hints of and are searching for.

Neutrino oscillations are characterized by “mixing parameters,” which dictate how the mass states add up to form the particular flavor states. (Mixing parameters also look at the differences between the squares of the three mass states.)

The particular quantum combination of neutrino mass states that make up the neutrino flavor states is controlled via the so-called Pontecorvo-Maki-Nakagawa-Sakata (PMNS) mixing matrix. 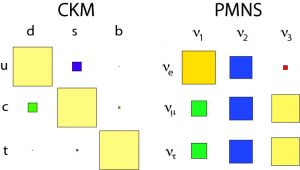 With three flavors (families) of neutrinos, the mixing matrix can be reduced to four independent components. These components are often written in a convenient format for experimentalists as three “mixing angles” and a CP-violating phase. Almost all of these mixing parameters have been measured to some degree, thanks to a suite of different neutrino oscillation experiments around the globe that use neutrinos from reactors, accelerators, and the sun. The one exception is the CP-violating phase. That phase could have any value, and if it turns out to be non-zero, then neutrinos and antineutrinos really do behave differently in ways that scientists did not expect.

Neutrinos are not the first kind of particle where scientists have observed “mixing” between flavors. A similar kind of mixing was discovered in the 1960s with quarks, the point-like particles that make up protons, neutrons, and all other nuclei. A long and storied campaign ensued to measure the mixing parameters of the quark mixing matrix, often referred to as the Cabibbo-Kobayashi-Maskawa (CKM) matrix.

After 30 years of very precise measurements, scientists know that the CKM mixing angles are relatively small, and that there is a striking lack of CP violation that many had hoped could explain the matter-antimatter asymmetry in the universe. In contrast, the PMNS matrix consists of relatively large (perhaps maximal) mixing angles, but the actual values of the mixing angles have not been precisely determined. These large but imprecise mixing angles are a driving force behind the desire to make more precise measurements, as such measurements could help rule out or support hints of physics beyond the Standard Model—bringing us one step closer to understanding our universe.