As if it weren’t confusing enough to have neutrinos of different flavors, different masses, and different matter (antimatter and regular matter), neutrinos also come in a wide variety of energies.

The energy of a neutrino depends on the process that formed it. Because neutrinos have no charge, there’s no way to use electric fields to accelerate them and give them more energy, the way scientists can do with particles such as protons. More energetic reactions will create more energetic neutrinos. These are great for scientists, because particles with more energy are more likely to interact and leave traces. They’re more likely to be stopped by regular matter and transfer that energy to something else (other particles) that detectors can pick up. 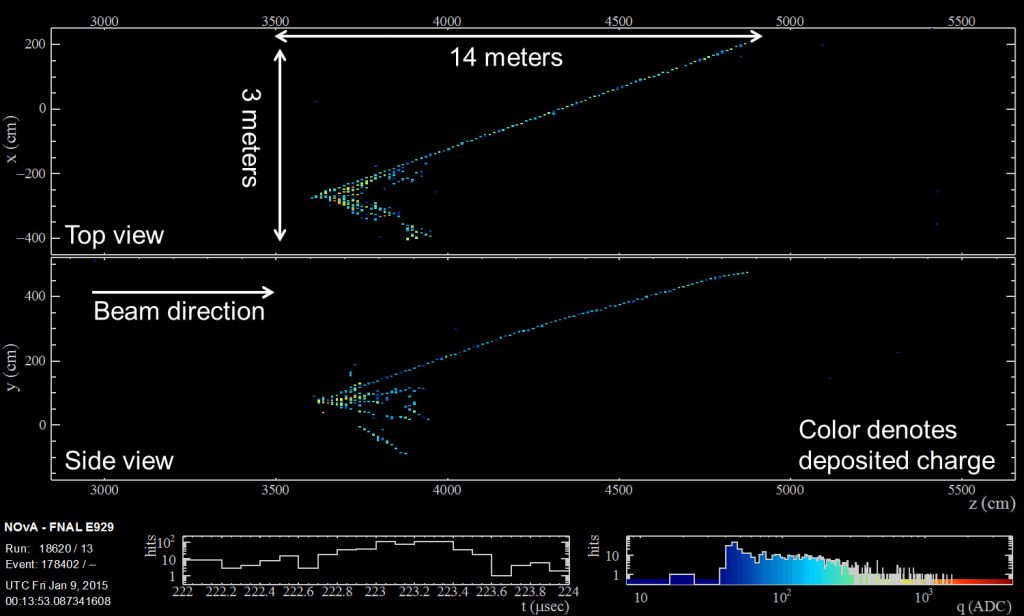 This track from the NOvA neutrino detector at Fermilab shows particles produced by a neutrino interaction. Credit: NOvA collaboration

Low-energy neutrinos, such as those left over from the Big Bang, are very difficult to find because not only are they weakly interacting (like all neutrinos), but they also don’t have much energy to pass on to other particles we can see. Even if they do, that signal is likely to be weak and hard to pick out from all the other interactions shouting over it.

Neutrino energy is typically measured in electronvolts. But there is a big range of neutrino energies. Some have one-millionth of an electronvolt, and some have a quintillion electronvolts (that’s a 1 followed by 18 zeros). That means plenty of neutrinos to explore, and interesting information about the processes that formed those neutrinos. 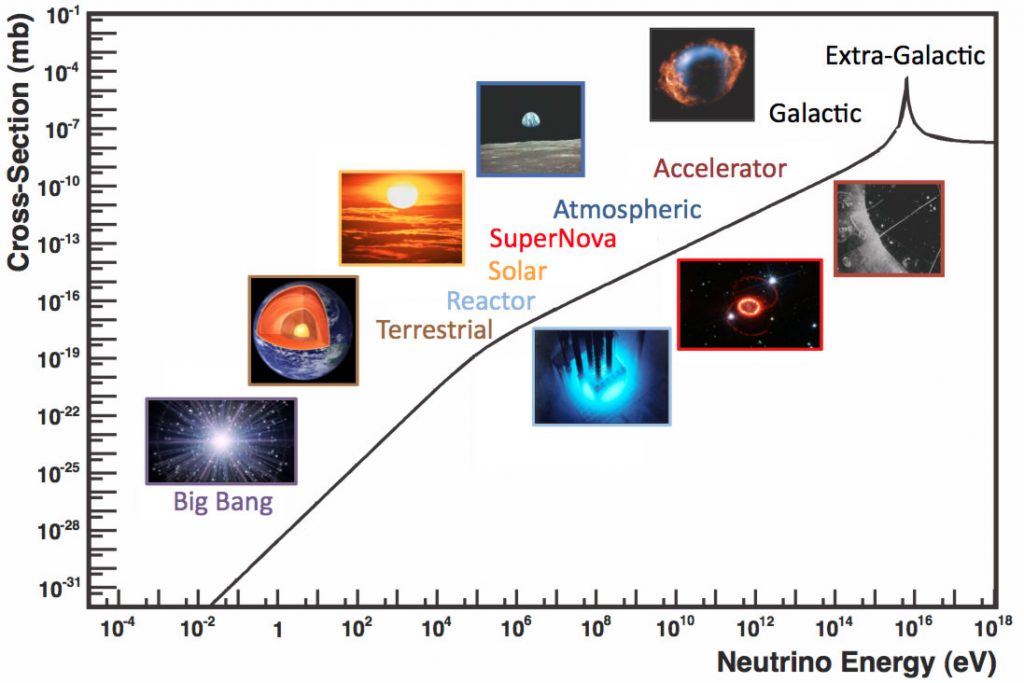 Neutrinos come in a wide variety of energies. Some of the lowest-energy ones come from the Big Bang, while the most energetic seen thus far have come from extragalactic sources. The neutrino cross section (on the y axis) is a measure of how likely the neutrino is to be stopped by regular matter. The higher energy a neutrino has, the more likely it is to interact. Credit: J.A. Formaggio and G.P. Zeller

Because neutrinos come in a very broad range of energies, an even broader range of techniques have to be used to see them.

The lowest-energy neutrinos come from just a few seconds after the Big Bang, and it is expected that these neutrinos have only a fraction of an electronvolt of energy. This is less energy than it takes to even knock an electron out of a hydrogen atom, making them incredibly hard to detect, because you need a detector with an even lower threshold. It turns out that materials at room temperature are vibrating with thermal energies that are much higher than these Big Bang neutrinos, so one way to see these lowest-energy neutrinos is to use stiller, colder materials (at cryogenic temperatures) and look for nuclei that receive a small amount of energy seemingly out of the blue. Another proposed method to see these neutrinos is using these low-energy neutrinos to stimulate a beta decay, then searching for an outgoing electron that has just a little more energy than one would expect. The trick, then, is building a detector that can measure tiny differences in electron energies. 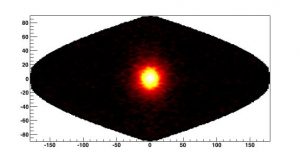 This plot shows the sun in neutrinos. The bright yellow at the center means a high concentration of neutrinos from that direction. Credit: Super-Kamiokande Collaboration/Kamioka Observatory, ICRR, Univ. of Tokyo

Neutrinos from the sun come in energies from tens to millions of electronvolts, a result of the many different fusion processes that take place there simultaneously. Scientists now know that most neutrinos from the sun are in the tens to hundreds of electronvolts. Researchers were able to see these only by building an extremely large scintillator detector and making sure there were no radioactive contaminants anywhere nearby.

The first neutrinos from the sun that scientists were able to see were the ones energetic enough to change a chlorine atom into an excited argon atom (by changing a neutron inside a nucleus to a proton). The was Ray Davis’s experiment at the Homestake Gold Mine. By measuring the radioactive decay of that excited argon atom, scientists made the first measurements of neutrinos from the sun.

Once a neutrino is energetic enough to knock an electron out of its orbital, then detectors that are sensitive to electric charges can pick the little particles up. The striking thing about this reaction is that the electron is knocked out of its orbital at exactly the same angle as the incoming neutrino hit with. If a detector can measure that outgoing electron angle and take into account the detector’s relationship to the sun, then you can actually “see” the sun with neutrinos. The detector, whether it’s on Earth’s surface or underground, will see the sun all the time, day or night.

Neutrinos from nuclear reactors have a million times more energy than Big Bang neutrinos, so they can be seen by measuring their interactions with atoms. One key difference is that the neutrinos from reactors are actually antineutrinos, so instead of changing neutrons to protons, they change protons to neutrons—and the neutrons are much harder to detect. The neutrons can be captured by certain particles that then decay and produce photons, particles of light, which can signal that a neutrino was there.

The Deep Underground Neutrino Experiment hosted by Fermilab will use an intense beam of neutrinos with billions of electronvolts of energy. Credit: DUNE/Fermilab

Finally, if you need a meter of steel to see a 1-GeV muon, then you need a kilometer of steel to see a 1-TeV muon. The detectors that have seen the highest-energy neutrinos are those that are made with a cubic kilometer of detector material. The question is, how on Earth can you afford a cubic kilometer of detector? You have to use some material that’s already available in large quantities and figure out how to pull a signal out of it. People have made detectors out of both ocean water and the ice in Antarctica to see these highest-energy neutrinos. 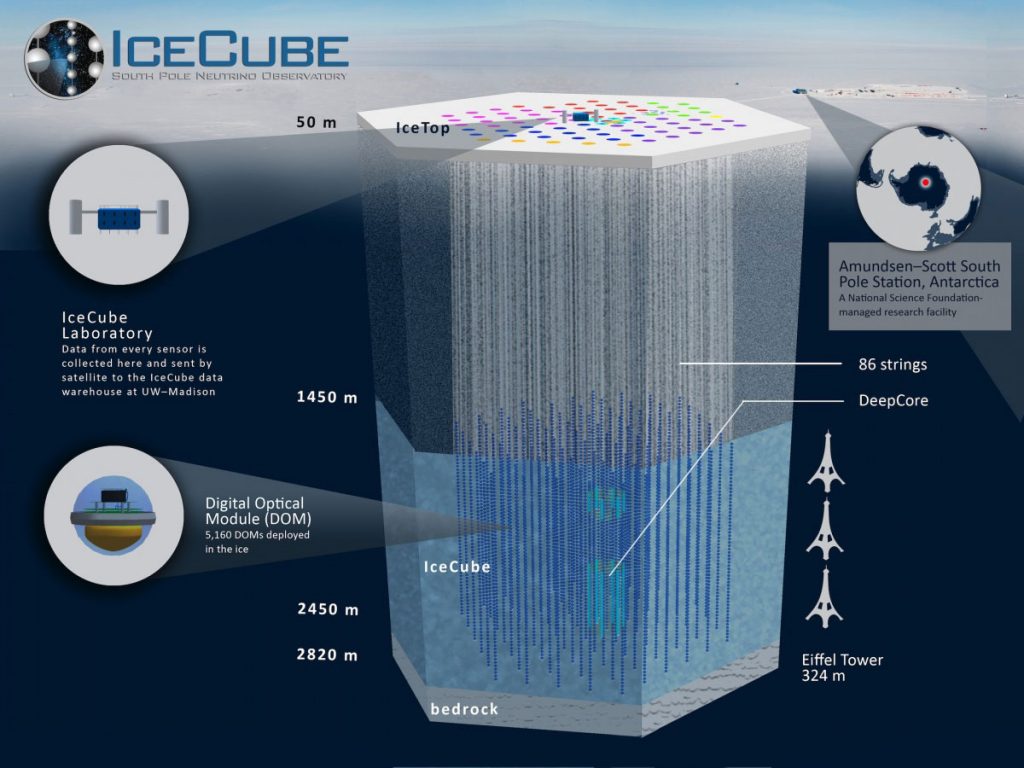 The IceCube experiment uses a cubic kilometer of ice in Antarctica as its detector medium. More than 5,000 sensors in the ice look for neutrinos from outer space. Credit: IceCube Collaboration/University of Wisconsin-Madison