But there is another way to think about neutrinos—their mass, or “mass state.” Physicists have named these neutrinos mass 1, mass 2, and mass 3, though they can also be referred to as ν1, ν2, and ν3. One might think that each of the three masses has a different flavor, but the truth makes matters more confusing: the mass state of a neutrino does not precisely match up with the flavor state of a neutrino.

A flavor of a neutrino (such as the electron neutrino) is made of a combination of masses (1, 2, and 3), and a neutrino of a certain mass (such as the lightest neutrino) has a certain probability of interacting in a detector to make a certain flavored charged particle (electron, muon, or tau).

There are many open questions about the neutrino masses, but scientists do know a few things. They know that the masses of the three neutrinos are small. And they know a bit about how the flavor mixture for each mass neutrino breaks down. Mass 1 leans heavily toward electron flavor; mass 2 is more of an even blend of electron, muon and tau; and mass 3 is mostly muon and tau. And the masses of ν1 and ν2 are close to one another, while ν3 weighs either much more or much less than the other two. 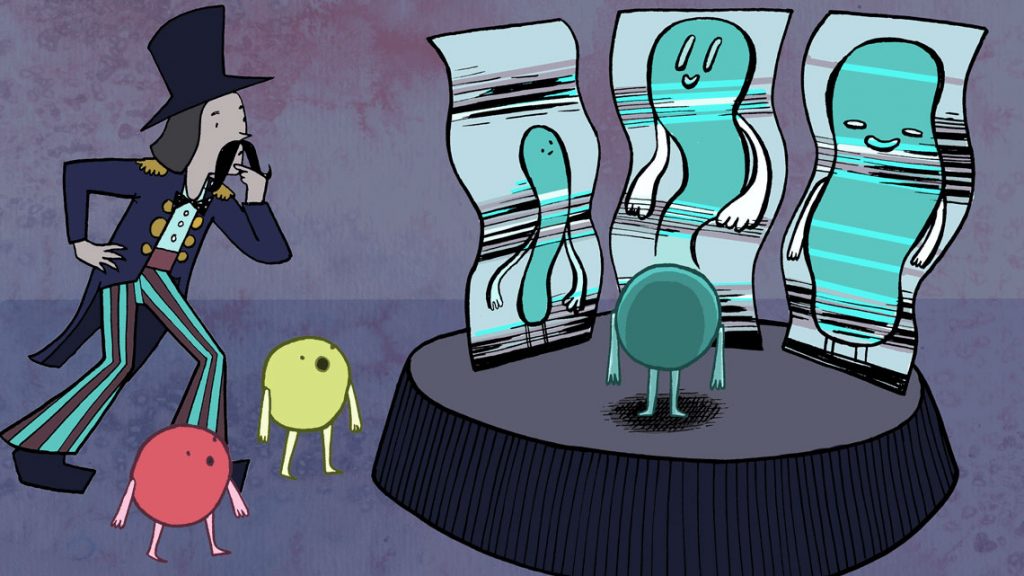 Here’s another way to imagine it: an epic food fight has broken out inside of an ice cream parlor. Your nearby friend slings a scoop in your direction, and it hits you right in your open mouth. You can easily identify the flavor as chocolate (and not vanilla or strawberry) the same way a detector can taste the incoming neutrino flavor (as an electron and not muon or tau neutrino). But something weird happened with that ice cream. It started in your friend’s hand as chocolate ice cream, and arrived in your mouth as chocolate ice cream, but on the journey in between, the ice cream turned into gold, silver, and copper coins.

These coins have different masses—just like the mass neutrinos, mass 1, mass 2, and mass 3. And because they weigh different amounts, they travel at slightly different speeds. Some of the gold coins start to fall behind a little bit, while the lighter copper ones fly a little further. You were relatively close to your friend when she threw the ice cream, so the coins didn’t separate all that much. Their ratio was basically unchanged when they reached you, and they transformed back into tasty chocolate ice cream once they reached your mouth.

Out of the corner of your eye, you see your friend throw chocolate ice cream on a long journey toward someone far across the store. The ice cream leaves her hand and POP: turns into a blob of coins. Over this long distance, the weight really starts to matter. The silver and copper coins arrive close together, and the gold coins a second later. PLOP. The ice cream lands in the target’s mouth, and he declares it tastes like strawberry. The ratio of coins making up the ice cream is different than when it started—and it turns out this affects the flavor.

If you had a pure mass state neutrino, it would consist of only gold coins, or only silver coins, or only copper coins. Because of the way things get really weird at small scales, these pure mass states would still have a probability of interacting as a certain flavor. That is, even if you had all gold coins, you still wouldn’t know for sure if the ice cream would taste like chocolate, strawberry, or vanilla when you detected it. But there would always be the same probability of tasting a certain flavor given a type of coin. In the same way, each of the pure mass state neutrinos has a different ratio of flavors it is likely to produce.

Neutrino physics is messy and delicious.