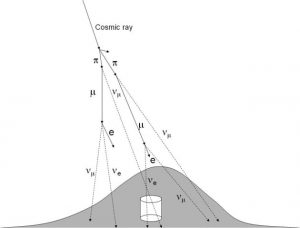 This diagram shows cosmic rays interacting with an air nucleus in the atmosphere, producing atmospheric neutrinos. These neutrinos are typically produced around 15 kilometers above the ground. Credit: Takaaki Kajita in the Proceedings of the Japan Academy, Series B, Physical and Biological Sciences (10.2183/pjab.86.303)

Atmospheric neutrinos are typically produced around 15 kilometers above Earth’s surface. They form when a cosmic ray, an energetic particle from space, crashes into Earth’s atmosphere. These particles are typically protons, though they can also be helium or heavier nuclei. When they strike an atomic nucleus in our atmosphere, there is a cascade of particles. Short-lived particles called mesons form, most of them pions (disappointingly, they are not made of pie). These are unstable particles made of two quarks, and they rapidly decay into muons and muon antineutrinos (or antimuons and muon neutrinos). A muon is also unstable, so it will usually decay into an electron, electron antineutrino, and muon neutrino. Thus, about two-thirds of atmospheric neutrinos are muon neutrinos and antineutrinos, and the remainder are electron neutrinos and antineutrinos.

In fact, it was deviation from this ratio that provided some of the evidence that neutrinos oscillate, or change flavor, as they travel. Scientists working on a variety of experiments, notably the Super-Kamiokande experiment in Japan, found that many fewer muon neutrinos were arriving than predicted.

The explanation? Muon neutrinos were oscillating into different types of neutrinos, causing a slight excess of electron neutrinos and a deficit of muon neutrinos. It took the enormous Super-Kamiokande detector, filled with 50,000 tons of ultrapure water, to gather sufficient data: 5,400 atmospheric neutrino interactions.

Click on this image to see a gif that cycles through some actual events recorded in the Super-Kamiokande detector.