Where do the highest-energy neutrinos in the universe come from? Scientists have some ideas, but they don’t truly know. The highest-energy neutrinos that scientists have seen are not made on Earth; they come from outside our own solar system and have energies far beyond anything we can produce in particle accelerators. This is one of those tantalizing physics mysteries: What’s cooking up these incredibly energetic particles?

The same thing that makes neutrinos so hard to catch—their reluctance to interact with matter—also makes them amazing messengers from far-off places in the cosmos. Unlike light, cosmic neutrinos can travel to us from places that are opaque and can reveal secrets of very dense places in our universe. And unlike cosmic rays, which are charged nuclei that we suspect share the same origins as cosmic neutrinos, neutrinos are unperturbed on their journey. Where cosmic rays can be deflected by magnetic fields, cosmic neutrinos can point back to their sources and provide clues to the extremely energetic processes that spawned them.

Some potential explanations include the remnants of supernovae, black holes, pulsars, explosions called gamma ray bursts, or reactions in the densely populated centers of galaxies (called active galactic nuclei). But it could also be something entirely new that we haven’t encountered before.

Using the IceCube experiment in Antarctica, scientists have captured neutrinos so energetic that they must have originated outside our solar system. Scientists gave some of them whimsical names based on Sesame Street characters: Big Bird, Bert, and Ernie. Other large experiments (such as KM3NeT, which would use instruments spread throughout a chunk of the Mediterranean Sea) are also interested in capturing these outlier particles. These cosmic messengers have ushered in the dawn of neutrino astronomy: another way of finding information about our vast, strange universe. 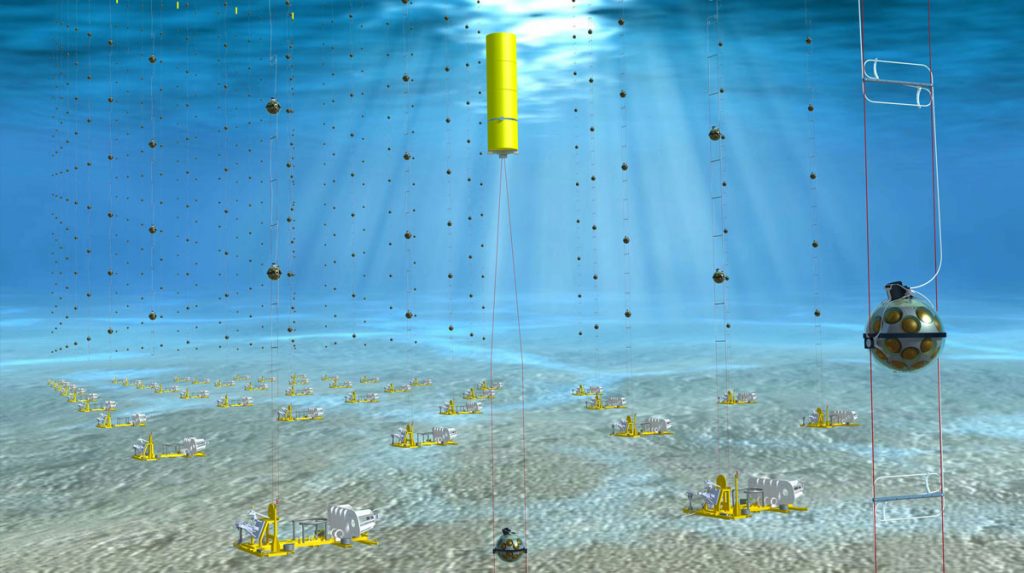 KM3NeT’s arrays of thousands of optical sensors will detect the faint light in the deep sea from charged particles originating from collisions of the neutrinos and Earth. Credit: KM3NeT collaboration / Edward Berbee / Nikhef

There are several possible cosmic sources of these ultrahigh-energy cosmic rays and neutrinos in our own galaxy and beyond: galactic sources, like supernova remnants, or extragalactic sources, like active galactic nuclei and gamma ray bursts. Neutrino astronomy is a growing field in which scientists map the sky with neutrinos instead of photons. These challenging experiments, which include IceCube, ANTARES, and KM3NeT, hope to shed light on the origins of these ultrahigh-energy neutrinos. 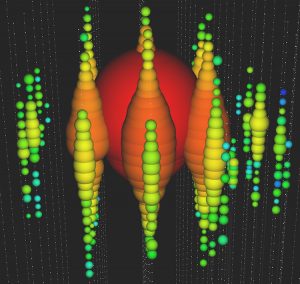 This 2-PeV (petaelectronvolt) neutrino event was detected by IceCube on Tuesday, December 4, 2012. It was dubbed “Big Bird.” Credit: IceCube collaboration

Although the IceCube experiment has observed several neutrinos at incredible energies, so far no one has identified a specific cosmic source. So although scientists have proof of their existence, they really have no idea what mechanisms produce them or where they come from. But challenges like these are what scientists love.

High-energy neutrinos become particularly interesting as we reach the so-called Greisen–Zatsepin–Kuzmin (GZK) limit. The GZK limit is a theoretical upper limit of the energies of cosmic rays from distant sources, which is considered to be anything more than 150 million light-years away from our pale blue dot. Cosmic rays should have this limit, at least in theory, because of the way they scatter off cosmic microwave background photons, the low-energy particles of light left over from the Big Bang.

This upper limit is about 1020 electronvolts, about 70 million times greater than the highest energies we have been able to reach in laboratories. While cosmic rays have to observe this limit, neutrinos don’t necessarily have such a limit—and those produced at these incredible energies are still able to reach us on Earth. The discovery of these incredibly energetic but unfortunately rare neutrinos could open an entirely new window with which to see and explore the universe.

Scientists are coming up with exciting ideas to search for those neutrinos. One example? Using radio technology in a high-altitude balloon to study the entire Antarctic ice shield.